Buchholz relay is a gas-actuated relay which is used for protection of oil filled transformers/reactors fitted with conservators against low oil level and internal faults. The Buchholz relay is provided with two hinged floats/buckets which on tilting operate mercury switches inside the oil tight enclosure. Mercury switches in turn actuated alarm and trip circuits depending upon nature of fault. 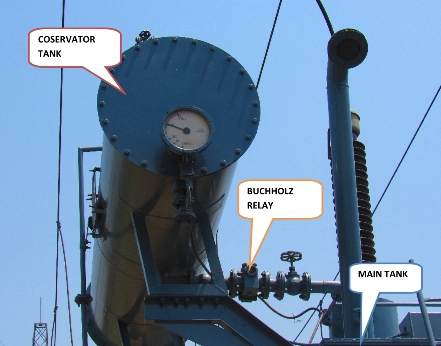 a)The Buchholz relay provided with counter balance aluminium buckets operate as given below:- 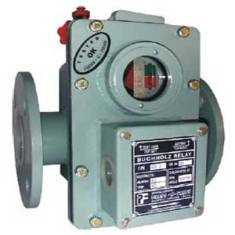 With minor faults gas formation is slow. As the gas accumulates the oil level in the buchholz relay falls, leaving the upper buckets full of the oil which predominates over the balance weight and the assembly tilts closing the mercury switch to operate alarm circuit. If the fault persists the oil level falls still further and the lower mercury switch operates the trip circuit which totally disconnects the equipment from the supply.

b)The Buchholz relay provided with two hinged floats operate as given below:-

Gas produced by abnormal conditions in the transformer, collects in the Buchholz relay which lowers the oil level so that the top float gradually comes down and ultimately operates the mercury switch when it reaches a certain level. This switch is usually connected to external alarm circuit.

Abnormal condition associated with major fault cause a surge in the transformer oil which moves towards the expansion vessel. This surge displaces the lower float operation the mercury switch associated with it. This switch usually is connected to the external trip circuit. This switch would also operate if the oil level falls below that of the float due to any reason. 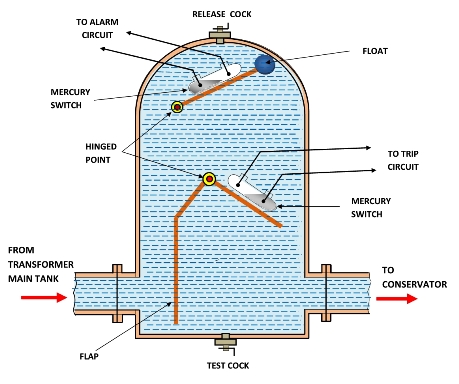 In the Buchholz relay,two pairs of electrically separate self reset ‘make’ contact one for alarm and one for trip, provided by mercury switch. They are wired to terminal box. General construction of the Buchholz relay:

Air may be introduced slowly through the petcock provided either at the top or bottom. Oil level will gradually fall till the upper switch operates the alarm circuit.

Fault analysis after nature of gas collected from Buchholz relay:

By studying the nature off gas collected , fault analysis can be made as shown in Table below:-