PRD is a device which is used for avoiding high oil pressure builds up inside the transformer during fault conditions. It is fitted on the top of the main tank. The PRD allows rapid release of excessive pressure that may be generated in the event of a serious fault. This device is fitted with an alarm/trip switch. 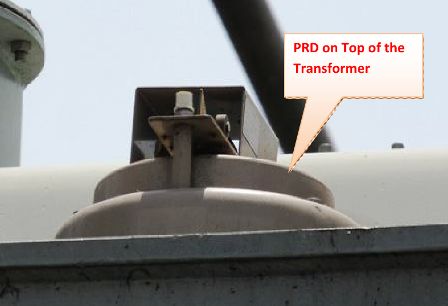 The PRD has a spring-loaded diaphragm, which provides rapid amplification of its actuating force and will reset automatically, as soon as the pressure inside the tank drops down to the pre-set pressure. A bright colour coded mechanical indicator pin in the cover moves with the valve disc during the operation of the pressure relief device and is held in position by an ‘O’ ring in the pin bushing. This pin is clearly visible from ground level, which gives an indication that the device has operated. The indicator pin may be reset manually by pushing it downward until it rests on the valve disc. The relief device is provided with a shielded weatherproof alarm /Trip and is operated by the movement of valve disc. 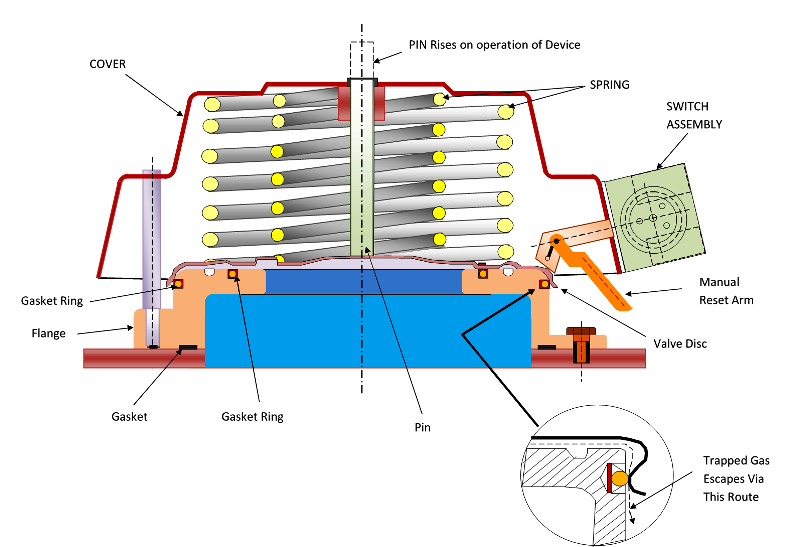 The PRD is essentially a spring loaded valve having a unique means of providing instantaneous amplification of actuation force. In the fig , the unit is shown. The PRD is mounted on transformer by lugs on flange and sealed against gasket. Valve disc is spring loaded and sealed against gasket rings and by spring. Valve operation is effected when the pressure in gasket ring exceeds the opening pressure established by springs. As disc moves upwards slightly from gasket ring , the transformer pressure than quickly becomes exposed to the disc area of the diameter of gasket ring, resulting in a greatly increased force, and causing immediate full opening of the valve corresponding to the closed height of the springs. The transformer pressure is rapidly reduced to normal value and springs return valve disc to the closed position. The PRD is provided with a shielded weather-proof alarm switch assembly mounted on the cover. The switch assembly includes a single-pole double-throw switch. The switch actuated by movement of valve disc the switch is manually reset by arm.