What is Circuit Breaker ?

Circuit Breaker is a device which breaks the faulty circuit to protect from damage caused by short-circuit fault current, overload current, earth- fault current in the circuit and after clearing the fault, the load can be easily linked to the circuit by closing the circuit breaker manually or automatically from local or remote operation.

Now, we describe the how circuit breaker operates in a circuit. 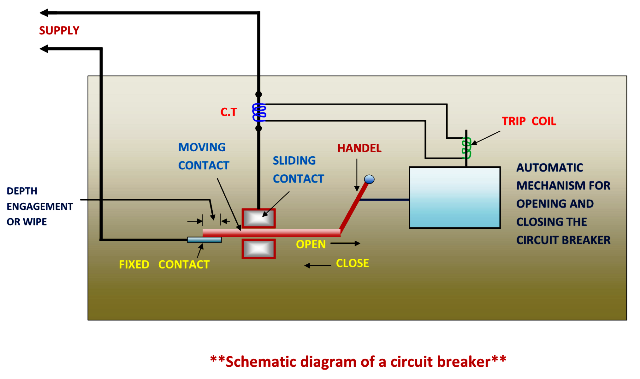 The circuit Breaker consists of a fixed contact and sliding contact and a moving contact. The moving contact moves into the sliding contact which is shown in the figure. A handle is attached to a moving contact, which can be manually operated or it can be operated automatically with the help of a mechanism which has a trip coil energized by the secondary current of the current transformer (C.T) which is shown in the figure. Under the normal working condition, the current in the secondary coil of C.T is not sufficient to energize the trip coil fully. But at fault condition, the abnormally high value of current flows in primary of C.T. Resulting high secondary current will flow in the secondary circuit to energize the trip coil so as to release the handle mechanism which opens the circuit breaker. And the circuit breaker disconnects the faulty circuit from the healthy system. The release of the opening mechanism is not instantaneous, but there is always a time lag between the energization of the trip circuit and release mechanism. The release mechanism will pull the moving contact and the resulting motion of the moving contact does not break the circuit immediately because there always exist a certain depth of engagement or between the fixed and moving contact which is shown in the figure. 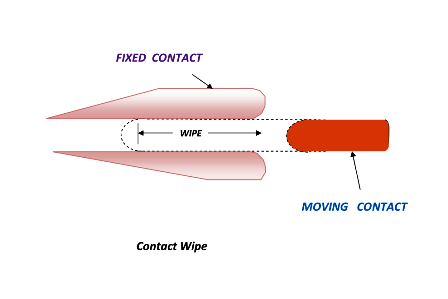 The time interval from the energization of the trip coil to the instant of contact separation is called the opening time of the circuit breaker.

As soon as the moving contact separates from the fixed contact a heavy arc is produced between them which persist for some time.

The time from the separation of contact to the extinction of the arc is called the arcing time, it depends on the magnitude of fault current as well as the voltage available to maintain the arc and upon the mechanism used for extinguishing the arc. The Sum of Opening Time and Arcing Time is called the Total Break Time.

A typical voltage and current condition during the opening of the circuit breaker is shown in the figure. 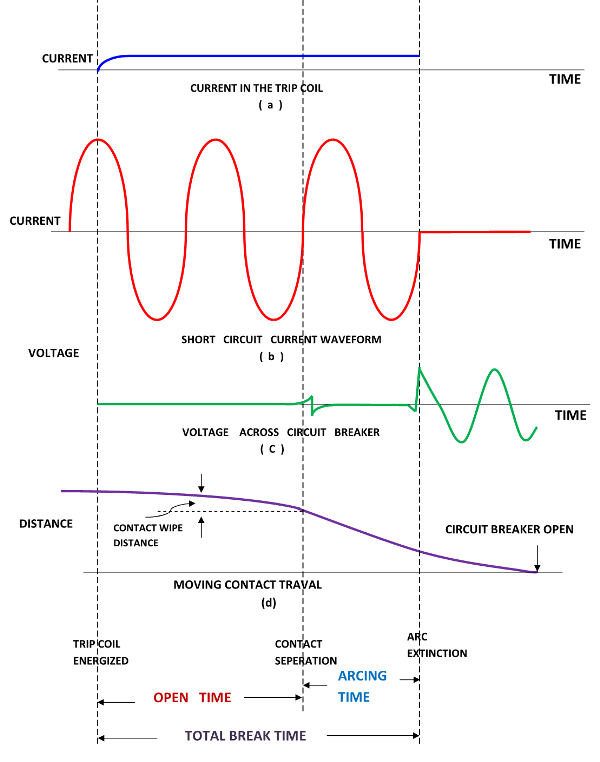 However, In the case of 3 phase A.C circuit Breaker the arc never extinguishes on all the three phases simultaneously because the arc is extinguished only at the instant when the current waveform passes through its zero value and the currents in all the phases cannot pass through their zero values at the same instant. For circuit breaker operation the breaker time is very important because this is a measure of an amount of energy liberated by arcing and the mechanical stresses produced by its components.

The different types of circuit breakers are used in the electric circuit.

The circuit breaker can be classified according to the below table:- 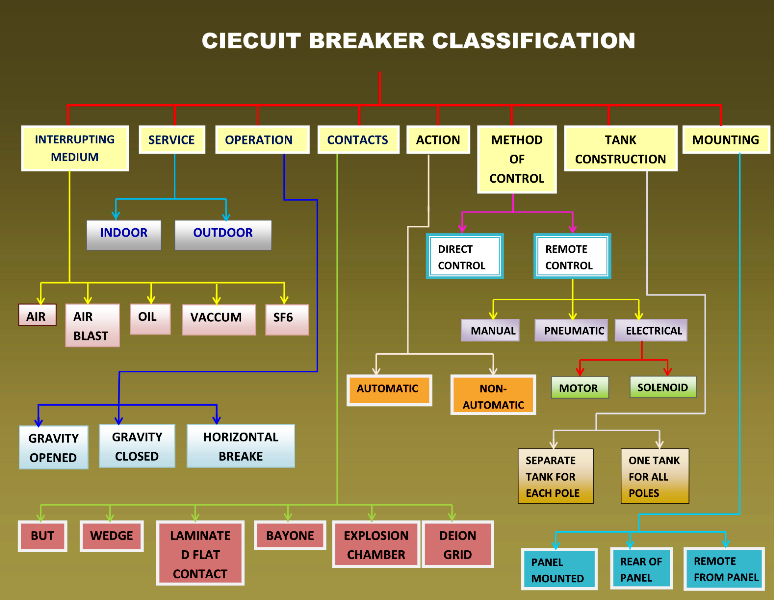