Current Transformer (C.T) and Theory and operation of current transformer

Current Transformer is an instrument by which we can easily measure high voltage current and also use for protecting the line. As long as the current to be measured is small and at low voltage, the direct method of connecting the instruments and relays in the circuits is convenient and adequate. If the currents exceeding several hundreds of amperes have to circulate continuously through the instruments and relays their design becomes more complicated and expensive. Still more difficulties arise when the current to be measured is at a voltage in excess of 1000 volts. 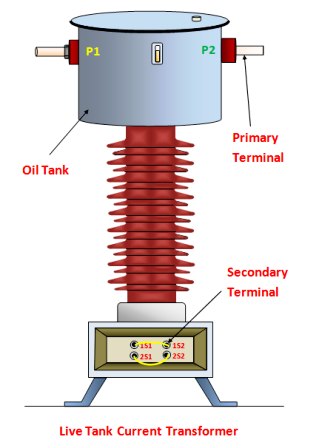 Theory and operation of current Transformers:

The following equation applies to an ideal current transformer:

The secondary terminal voltage V2 is controlled by the burden of the transformer, i.e., by the impedance Z2 of the secondary load circuit. i.e., V2= I2Z2 The resistance and leakage reactance of the secondary winding can be combined in the internal impedance Z2 of the transformer. The voltage E2 induced by the magnetic flux must, therefore, exceed the terminal voltage V2 by an amount to compensate for the internal drop. 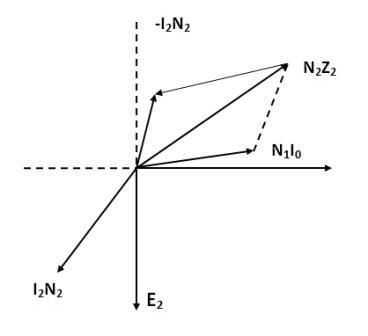 The schematic connection of a current transformer and vector diagram are shown in fig. Current I1 circulated in the primary winding which is connected in series with the lines, the secondary delivers a current I2 to the impedance of the winding and that of the instruments and relays. The vector diagram in fig. shows the functioning of a transformer in which ɸ is the flux common to both windings.This flux ɸ generates EMF E2 in the secondary . And I2 current flows through the impedance Z2 + Zi. This flux is produced by a component of the no load current I0, the vertical component of which accounts for the losses of the transformers. A part of the primary ampere-turns , i.e ,I0N1 are consumed in the excitation of the core , to induce sufficient voltage in the secondary current I2 can be forced through the total secondary impedance Z2+ Zi. The balance ampere turns ( I1 – I0) N1 are now available for transfer to the secondary circuit such that, ( I1 – I0 ) N1 = I2N2 This current I0, is responsible for the different in actual ratio I1/I2 and the displacement in vector N1I1 and – N2I2. These are called the current (or ratio) error and phase error.

Current error is the percentage error in the magnitude of the secondary current given by the formula.

Where , Kn = the rated transformation ratio, Is = the actual secondary current when Ip is flowing in the primary winding, Ip = the actual primary current.

Composite Error is the RMS value of the difference under steady state condition, integrated over one cycle between,

This is generally expressed as a percentage of the RMS value of the primary current according to the following expression.

Exciting current is the r.m.s value of the current taken by the secondary winding of a current transformer when the sinusoidal voltage of rated frequency is applied to the secondary terminals, the primary and any other windings being open circuited.

Knee point voltage is the sinusoidal voltage of rated frequency applied to the secondary terminals of the current transformers, all other windings being open circuited, which when increased by 10 percent , causes the exciting current to increase by 50 percent.