Skin effect of the conductor in Transmission line

When an alternating current passes through a conductor it does not flow uniformly all over the conductor. The concentration of current is higher on the surface of the conductor than at the centre, thus increasing the effective resistance. This effect is called the skin effect which is prominent at the higher frequency. The skin effect increases with the increase of cross section and permeability of conductor and reduced in stranded conductors. 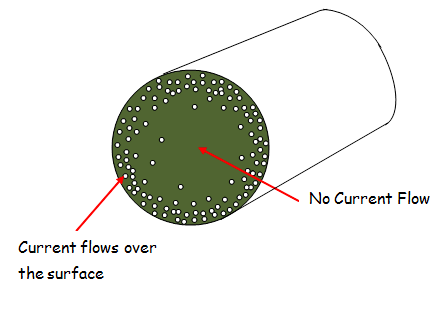 The solid conductor considered can be thought of having a number of strands one over the other, each carrying some portion of the current, so the inductance of the each stand will be vary and will increase towards the center. The high reactance of the strands near the center will increase the tendency of the current to flow with greater density near the outer stands. This result in a more power loss for a given r.m.s value of current, or the effective resistance is increased, also skin effect decreases the effective internal reactance. According to Maxwell and Rayleigh, the ratios of skin-effect resistance to direct current resistance and the skin-effect reactance to direct current reactance are given as: 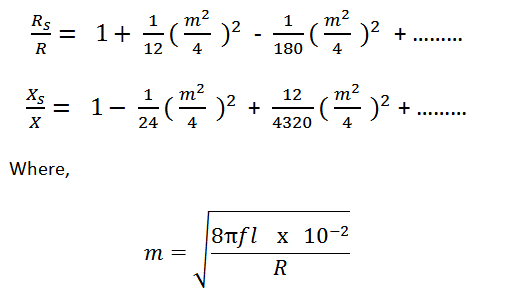 Hence the skin effect resistance and reactance depend upon frequency. For high-frequency currents, the skin effect predominates. The above formulae are not much used practically. For practical purpose the value of is given as.

The empirical formula for are :

The Skin effect depends upon the following factors: